I used the hwy 85, 90, 16, 385 and 244. While the hwy 85 as well as the hwy 90 were somewhat boring, the others were going through beautiful landscape. These days a lot of bikers were in the area, because the annual bike rally was ongoing in Sturgis. What surprised me, were the bikers, who were riding their bikes without helmet and in summer clothes. A young woman even was wearing hot-pans, that means she had bare legs. I did imagine, how an accident would hurt her.

I visited the Mount Rushmore National Memorial for almost four hours, walking the trail and listening to a ranger about the history and work on the monument in the Sculptor’s Studio, but the first I did, when arriving, was to buy a Buffalo Bratwurst. It came only with bread and was for 8 USD. I was awaiting high prices there, therefore I skipped the ice cream (after an original recipe from one of the late presidents) and had water with me. By the way, I had to pay 11 USD for the parking, but this should be valid also for other places. The text on the receipt is “Annual Pass”…

It was really interesting to hear, how they measured and also to see the model, which is different to the result. Can you imagine, that a lot of dynamite was used to get the shape of the monument – until three inches close! The workers came from all of America and all were useful for the different kind of jobs. This interest in working with the monument was partly depending on the years of depression.

I took lots of photographs from the heads from different views, but also from the surroundings. 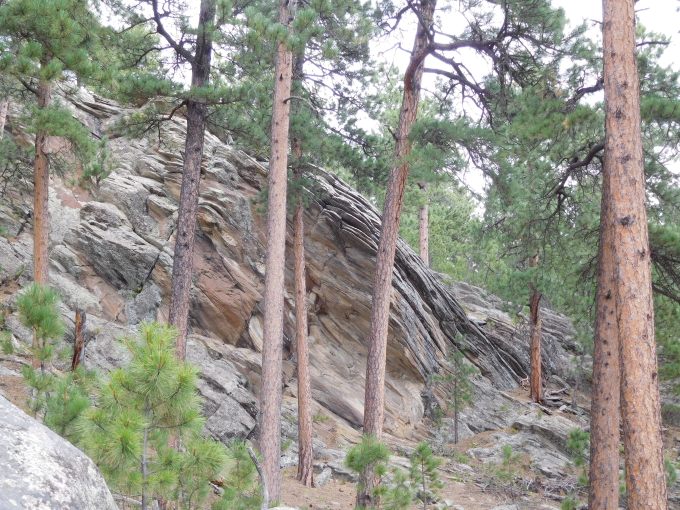 I used my tripod and made one and another selfie. A girl was eager to help me with photos of me and the monument, but they were so badly taken, though I deleted them, because my own photos were much better. Furthermore it was hard to get a photo without any other visitors at this place – above the amphitheatre – because the crowds. On one place I asked a father, who was there with his family, to take a photo of me. I saw, he was a good photographer by the way he arranged his family for their own photos. He did take a really good photo with me and the background I had chosen.

At the end I took a look at the souvenir shop and finally bought a small flip-up coin purse, to hold my USD and CAD coins separated. It was around 4pm, when I was leaving and the crowds where still entering.

I continued to the Crazy Horse Memorial, but first I took a detour back to Keystone, because the right lane from the area of the MRNM seemed to be closed. When coming up for the hill the second time, I saw, that it was not. I had driven a lot of unnecessarily kilometers down the steep hill and up again. By the way I passed a car, which was stopped by the police. I did not see police on the way, but when they had stopped cars, obviously when they had been speeding.

At and around the Crazy Horse Memorial it was not so crowded. I had to pay 11 USD again for entrance and parking, because it is private run and not included in other entrance fees. The memorial has a very interesting history. I started with taking a bus tour for 4 USD up to the memorial. We have got splendid of time for photographs and the bus driver did answer questions. The memorial is far away from finished, but there is no government money involved. Anyway it was much harder for Korczak, who started with the carving of the sculpture as it is for his sons today. He had to start from scratch without all these modern equipment. In any case it will take time to finish this monument of superlative size. It is already amazing to see and people with more money than me and without being afraid of high can also come much closer to the already finished part of the memorial.

For more photos of the Crazy Horse Memorial and related views click photographs.

In the area there is also a museum, a restaurant, a shop and a university site. As long as I understand, there are so far only summer courses at this university. The museum is about the culture of the Natives. It was very interesting. There are shops in the shop respectively in the museum, most of the artist are Natives and the others use native techniques and materials. Even the first home of Korczak and his family is displayed as well as there is a department explaining the work on the memorial. In addition to that, a model of the Crazy Horse Memorial is exposed. Furthermore there is a building for theatre, music and dance. The day I was there, a young man, named Darren Thompson played tunes by different Native American Flute and other flutes. He also explained the instruments. He was really great. He told us listeners, that a CD with his music is for sale at the shop, but I did not find it.

The place closed at 8pm, but there were a light show from 9pm, though I stayed on the car park, sitting in my car. The show was not bad, even it was different as I expected. Light was casted onto the memorial with the story about it. I had been waiting for to see the memorial enlightened in different colours instead, but I was not disappointed at all, because it was just different, but well done.

I do not like driving in the dark, I never did. Though I tried to find a campground as soon as possible, but the ones I saw were all on the other side of the highway, which had dual carriageways. I felt, like I drove around half an hour – I did not check it on my watch and the highway was not anymore dual, when I paid attention to a sign for a national campground: The Comanche Park in the Black Hills. A had to wait for another car, coming against me, but she also turned into the driveway for the campground. We stopped both at a sign, which told us all, what we needed to know, but not the fee. We looked for a place to stay and stopped on totally different places. I was happy to have found one close to a loo.

The next morning I also found a water tap close to my place. Meanwhile I was packing my belongings, the host was coming. He started a chat with me and told me then, he won’t bother me. He did not collect the fee!

I had planned to drive to Hot Springs, but drove the hwy 16 instead for hwy 385. When I discovered my mistake I thought, there will be hot springs in the Yellowstone National park and drove further. I crossed the border to Wyoming some kilometers before Newcastle.