Coming from Montana going to South Dakota I had to drive through Wyoming or North Dakota. I could not be sure, that my European Drivers License with my translation would be accepted in North Dakota, though I chose Wyoming. This time only for some hours, but with lots of deers beside and on the road. I was really happy, that I did not hit one. The community I passed was Colony. In Belle Fourche I stayed overnight at a camping spot close to town. The owners or administrators I found in an office in a shed. They were drinking and told me, that I have to pay 20 USD, when I told them, that I only come with a caravan and do neither need electricity nor water. Unfortunately the washroom including the showers was shabby. I did not take a shower, because I was afraid of getting athlete’s feet.

Anyway the next morning I had a good chat with a female traveler, who was going around with her partner by motorcycle and a little trailer, having a tent. Furthermore there was another couple with them. As usual she told me, that I am brave and I answered, that I am somewhat crazy. By the way I had parked my car close to a light in the evening, when I arrived, though I was able to see, what I was eating and also to find my night-gown.

The 13th I left around 9pm heading to U.S. hwy 85 and Interstate hwy 90. Both highways are situated in South Dakota. Read about the highway on Wikipedia (see the links).

I came to Newcastle via US hwy 16 from the border of South Dakota. I stopped for buying a coffee. The café was full of bikers, though I ordered a coffee to go. Afterwards I took a look at the small town. Here I have seen the first “Drive Trough ATM”. 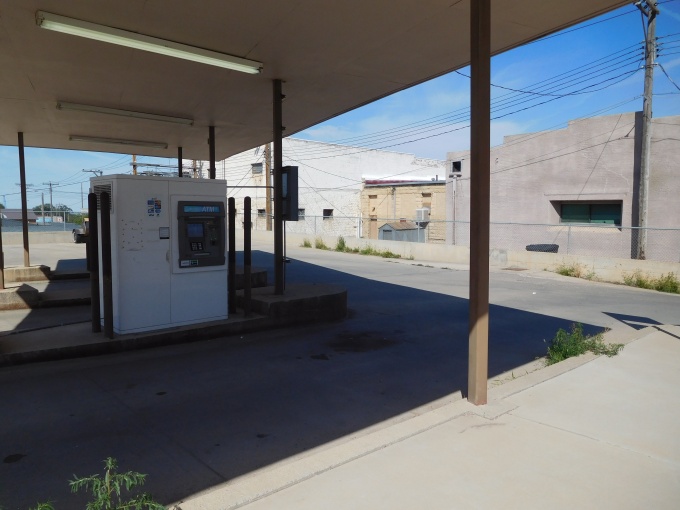 I continued on hwy 16 and was overwhelmed by all the stunning views, especially after I have been driving throughout the town Buffalo, where I stopped at the tourist information. The male assistant was eager to help me and also gave me a road map from Montana. Soon I drove through a fairytale wonderland! Who thinks, North America is driving for hours and hours seeing the same landscape, is wrong. North America is diverse. Unfortunately I could not take photographs respectively make videos from all that breathtaking views but some, but I wished I have had a video camera on the top of my car.

When I had to buy fuel, I also bought a mixed salad, which was really big. It contained salad (lettuce, tomatoes, cucumber…), chicken, boiled egg in slices and pan-fried bacon. I had not really reached my destination for the day, when it became dark. It was around 9pm when I drove through the gate for the Yellowstone National park. There is usually a fee to pay, but this was not possible by the late arrival. I tried to reach the Lake village, but missed the sign in the dark, though I turned around and was driving to the small town, called Canyon. On my way to this place I passed the Volcano mud and geysers as well as the Grande Canyon of Yellowstone.

[The most part of the Yellowstone NP belongs to Wyoming. The border to Montana is not easy to find, therefore I have placed the lines about my travel throughout the entire park here.]

I was full of hope, that I would reach the village Lake during daytime, but there are to many beautiful views and opportunities to stop beside the road, though I did not make it. By the way a kind of deer were crossing the road in front of my car in the evening hours. It had shorter legs than the “usual” deer, but the body had the same colour. The neck and head were darker and the tail white. It might have been a “Fallow deer”. Close to that village and the lake is a resort with a huge car park. Lots of people were going to a meeting area, though I stopped to find out, what was up and also, if it was possible to stay overnight on the car park, because it was even signed as a recreation area. I found out, that a ranger will talk about safety in the forest, that means, how to cope with the wildlife, e.g. meeting a wild bear. This event had not started and more and more people were arriving. I could not see a washroom either, though I decided to drive further. At the next junction a sign told me, that I have to drive to the left and then for 1 km to come to the village Lake. I chose the left hand turn and was driving in the right direction, but did not see another sign for the village. I think I drove 3 km, then I decided to went back and try it with the small town Canyon, which was a few kilometers further North.

Arriving in Canyon I first only saw a resort, but while driving around and looking for the town I found the campground. This one did not have its full capacity, because of road works on its roads, but there was still a place for me. By the reason for sleeping in my Caravan I have got a place quite close to a washroom. The stay for one night was for 31.37 USD. I also have been told, that there are wild bears in the area, though I have to be careful and to stay in my car. I really would love to see a wild bear, but not to meet one in the dark. Though I was happy that there was none, when going to the washroom in the middle of the night.

Next morning I took my medicine and drove then to the showers, which are in the same building as the reception. First I entered the laundry and what a surprise: I have never before on a campground seen such a well maintained laundry with so many washing machines as well as dryers. In addition to that there were ironing boards and irons. Crossing this area I came to the showers. I did not count them, but there were around twenty of them and they were all clean! I definitely enjoyed to shower here. Now it was time for the coffee and it was sold here, too. A cup was for 2.60 USD and one could get three more fillings during the day. Unfortunately there was no lower price for people leaving early. I drank my coffee in the car and ate something.

This done I drove back to the Volcano muds and geysers as well to the Yellowstone Grand Canyon with the upper and lower waterfalls. I looked at all of the canyon from the lower and upper rim, but before I reached my first destination I had to stop for a queue. Soon I realised the reason for it. Bison (buffalo) were crossing the road. I parked nearby and took some pictures, carefully holding a safe distance. At every place I tried to get the optimal photograph, though I spent a lot of time and also was walking quite a distance during the morning hours this day. Before finally leaving the National park I had to stop one more time for a bison, but a single one, which was very close to me. Unfortunately I did not see a wild bear, but I hope to see one in the Canadian Rocky Mountains. 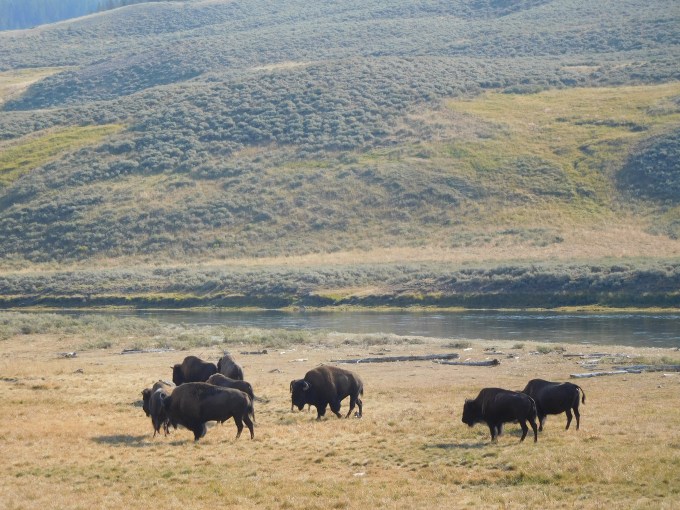 For photos taken in the Yellowstone National park click photographs.

The rest of this trip was going throughout Montana.